RRJFC U13’s experience a match day experience hosted by our very own 1st team at the BEP stadium. Mark Eaton (1st Team manager)  and his team gave our u13’s a training session on the day when the senior club was playing a match therefore they got to see the tactics board prior to the match and meet all the 1st team players .

Great day out and a big thank you to our 1st team who are currently top in their division. 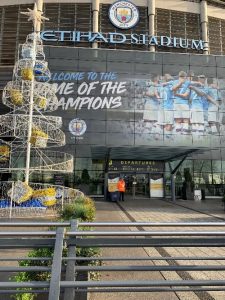 Max Gray (Under 12s), was lucky enough to raise the most money for the FIFAR Sponsored walk. Which is a great community charity supporting local schools.

Andy Quigley promised to get tickets to a Premier League game of anyone’s choice and we picked the Manchester Derby.

It was a great game of football, with United winning 2-1. Good football was played, and it was like watching RRFC under 12s!!

The England winger said: “Football helped build my confidence as a young girl.

“I’m actually working with some individuals at the moment to learn more about myself as a player.

“I’ve dug a bit deeper into how I am as a person off the pitch and how I am on it.

“I don’t actually realise that maybe I’m different when I’m playing until someone has actually picked up on it.

“When I’m on the grass I’m confident I show who I am as a person whether it’s in a shot that I take or a skill I do. 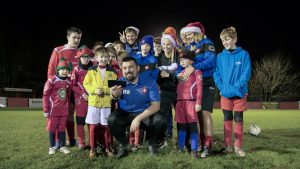 “It’s so important that sport is open to everyone and HONOR is helping these young disabled people build their own self-belief and leadership skills.”

Mead, from Whitby, North Yorkshire, is currently recovering from a badly bruised leg after a crunching tackle in the Gunners’ 3-1 win at Everton.

The table toppers have scored a whopping 73 goals in just 19 games across all competitions so far this season and it has been a landmark year for Mead.

She was part of the record breaking North London Derby in Novemeber which saw 31,213 fans at the new Tottenham Stadium – the highest ever WSL crowd.

And will cherish the memory of playing in front of over 77,000 fans at Wembley in the Lionesses’ disappointing 2-1 defeat to Germany in the same month.